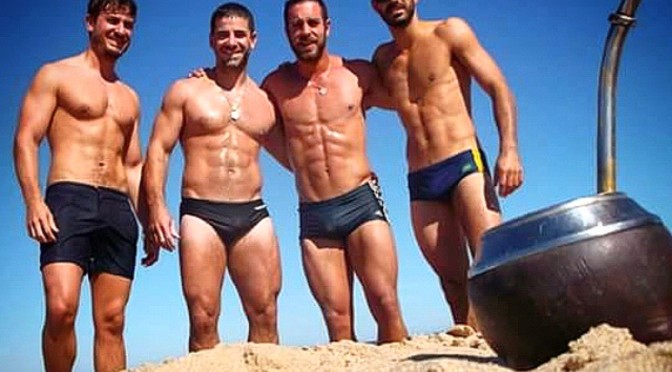 With its many beaches, elegant seaside homes, yacht harbor, high-rise apartment buildings, pricey hotels and glitzy restaurants – Punta del Este is one of South America’s most glamorous resorts and easily the most expensive place in Uruguay. Extremely popular with Argentines and Brazilians, Punta suffered a period of decline during the Uruguayan and Argentine recessions, but has come back with a vengeance.

Punta del Este’s scenic coastline is divided into two regions: Brava (Spanish for “fierce”) and Mansa (Spanish for “tame”). The limit between the two marks the end of the Río de la Plata and the beginning of the Atlantic Ocean, and split is signaled by the Mano de Punta del Este, which the sculptor designed to warn swimmers about the danger of rough waves. Beaches on the Mansa side feature thick and golden sand, while on the Brava side the sand is white and fine. Every beach of the peninsula has public access.

Playa Chihuahua is where the boys are … and a large section of it is “clothing optional.”  Chihuahua is about 20 minutes away by car from Playas Brava and Mansa and offers a great escape from the frenetic shopping and tourist activity of Punta.   A short walk from Playa Chihuahau, you will find Undarius Hotel (formerly named Casa Mario, but under the same friendly gay ownership.) Undarius is a B&B for gay men with a laid back vibe.

Looking for a gay bar or nightclub?  You won’t find one. (Many out-dated gay guides to Punta del Este mention Kronos and Mercury, but both are now long gone.)  Instead, you will find a few great mostly straight, but gay-friendly places.  (Click here for our Google Map to Gay Punta del Este.)

Punta del Este’s international airport (PDP) may be small, but it is serviced by a large number of regional and international carriers. Check the following websites for cheap deals.

Full of indoor amenities, the 2122 is set further back from both coast –  a location that removes it from touristy annoyances while remaining within walking, or a short cab ride, of most of Punta’s nightlife and shopping.

Luxury on the beach!  The Serena is popular with gays and straights.  Click below for photos and reviews.

Gay owned and operated!  Undaris is gay-only and clothing optional.  But, don’t let the nudity scare you off.  You can wear your trunks and lounge with a drink, or go for a nude swim in the pool.  There is a range of rooms from private suites, to dormitory-style lodging.

Where to Play – Bars & Beaches

Over the top (and overpriced) this is where the beautiful people converge at night to party to the beats of international DJs.  By day, OVO is more laid back, catering to tourists.

A classic pub which, over the years, has become a meeting spot for gays and lesbians.  Grab a beer and then head out to one of the many restaurants nearby where you can continue the night.

Looking for ways to connect in Punta?  Grindr remains one of the best ways for meetup with locals and your fellow gay travelers.  Also, the front desks of any of the gay-friendly hotels listed below give excellent recommendations!