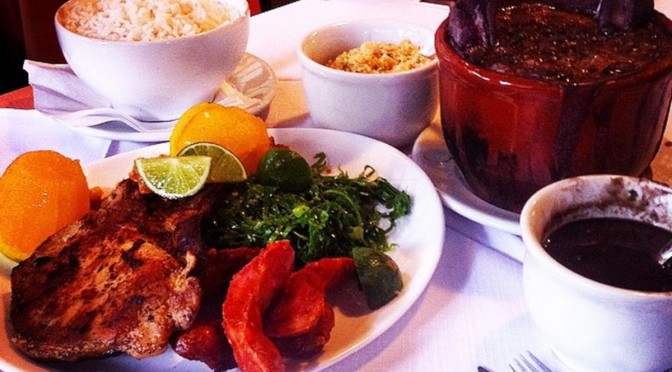 Chopp Escuro is one of a handful of traditional restaurants Largo do Arouche frequented by straight middle class paulistanos that continues to flourish despite their sketchy surroundings.  The restaurant’s larger tables might be filled with a family out for a parmegiana, or a group of gay friends having a Friday night dinner.  Yes, you can hear parents singing “Happy Birthday” while outside transsexual prostitutes walk by on their way to work.

When it comes to food, Chopp Escuro is very traditional.  The menu excels with plates showing off the European roots of Brazilian favorites, such as stroganoffs and bachalão (cod fish) dishes.

Chopp Escuro is also a great place to try pestiços (tapas-like appetizers.)  You can take advantage of their menu which offers them one-at-a-time.  Try the bolinho de abobra ( a bite-sized fried ball of savory creamy pumpkin) and a glass of chopp (the on-tap beer from which the restaurant gets its name.)