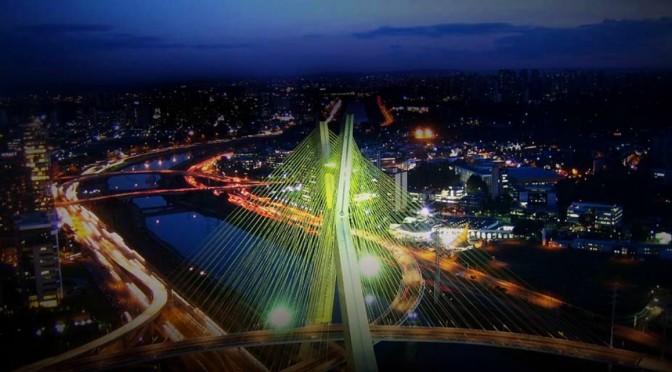 Finding gay men in South America’s largest city can be difficult, but not impossible if you know where to look.  Scroll down for a neighborhood-by-neighborhood breakdown.  Or, click the button below to view the VamosGay.com Google Map of Gay Sao Paulo.

Also known as “Gay Caneca” this is an LGBT-friendly (or some might say LGBT-dominated) section of the Consolação neighborhood.  Its borders are roughly defined by the massive and bustling Avenida Paulista and the very gay and very cruisey Shopping Frei Caneca.

Nightlife in Frei Caneca remains anchored by long-standing night club A Lôca which also reflects the youthful nature of the neighborhood.

Much like New York City’s West Village in the 1980s, Largo do Arouche is dirty, a bit dangerous, but never boring.  Easily walkable in 15 minutes, this “gayborhood” flourishes as a home for the entire queer rainbow.  Bears, daddies, lesbians, and transsexuals are equally at home.  Bars and clubs in Largo do Arouche are all about having a cheap good time.  There’s no architecture or design to admire, just alcohol, music, and good times.

The area’s biggest dance clubs are Cantho and Danger Dance Club, but most of the party is actually in the middle of the street on Avenida de Carvalho in front of popular bars like Soda Pop and Caneca de Prata.

On the other side of the praça (the park at the center of Largo do Arouche,) sex clubs and cinemas continue to operate while homeless gay and trans youth provide their own brand of entertainment on the streets.  This area is the most dangerous of São Paulo’s gay neighborhoods.  Tourists should use extra caution, but have a good time.

Largo do Arouche is a section of the greater Downtown area (known as Centro, which is mostly straight.)  One way to experience quickly experience Centro is to take a 15-minute walk up to Avenida Iprianga for the city’s best cocktails at Bar da Onça and the best coffee at Cafe Floresta.  Both are inside of Edifício Copan, one of the largest buildings in Brazil and the creation of the country’s premiere architect Oscar Niemeyer.

Not gay per se, but on it’s way! Pinheiros is currently in the midst of a gentrification boom as trendy young gays hunt for apartments, culture, and nightlife. The neighborhood had long been a Saturday afternoon destination for the gay-friendly outdoor fair at Praça Benedito Calixto.  Hip restaurants like Le Jazz and Suri Ceviche Bar continue the list of places worth visiting.  After dark, Pinheiros is home to Bubu Lounge, whose Friday night party is highly recommended.

Across the divide of Avenida Paulista, chic boutiques and upscale restaurants make the neighborhood known as Jardins one of the most desirable districts in São Paulo.  (Jardins and Cerqueira César are often used interchangeably in guidebooks to refer to the same region.  Stick with Jardins when chatting with locals.)

For visitors, Jardins has many hotel, bar, and restaurant options and is within 15 to 30 minutes walking distance from most of the gay hot spots in Frei Caneca.